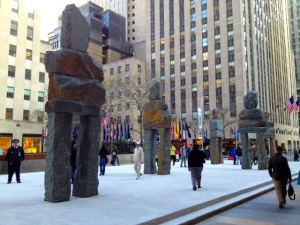 Every morning for about a week now, I’ve passed by the NYC Public Art Fund’s latest installation in Rockefeller Center, Ugo Rondinone’s Human Nature. Being the philistine that I am, I thought at first that it was an homage to Stonehenge, which would’ve been sort of tacky but on par with the installation’s touristy venue. I didn’t pick up on each (30 ton!) rock formation’s resemblance to human figures until the city made its official announcement. But I see it now.

I’ll concede that, at first blush, the figures have a kind of quiet dignity. They are certainly more attractive than the terrible monuments that the city routinely puts up in the Doris Freedman Plaza by the southeast corner of Central Park. I’ll give the Art Fund that.

But still I shrug. I hardly feel a thing while standing in their presence, which continues to be my base test for contemporary art. “Forest of giants”? “Primal forms”? It’s a stretch for me.

My ambivalence might have to do with my general aversion to rock sculptures ever since I saw Lee Ufan’s nutty Marking Infinity exhibit at the Guggenheim (a security guard confided to me that the rocks were from the Jersey shore and the artist didn’t personally nudge the rock into their formations, or the cut up wires and cotton balls with which they were arranged himself).

Or maybe the art’s incongruity with its bustling setting throws me off. Rock Center is hardly the place to quietly contemplate our human race’s “distant origins.”

Well, since I still staunchly support public art, I hope that my opinion turns more positive in the coming weeks. Stay tuned.